A research ship is taking seabed samples from the North Sea and North Atlantic to find out what the oceans were like before major changes caused by humans.

The RRS Discovery started its voyage from Southampton on 16 April and has collected sediments, shells and bones off the UK, Norwegian and Icelandic coasts.

After sampling around Shetland and Orkney, the ship is now heading to Iceland’s north coast before a scheduled arrival in Reykjavik on Friday. 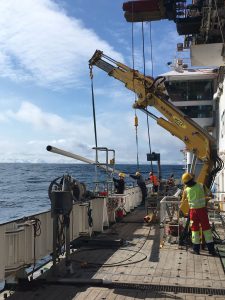 “We will be able to reconstruct the full richness and diversity of the oceans immediately before they were impacted by significant human activity, for instance before Iceland was settled or there was significant whaling in Antarctica,” said Professor James Scourse, of Exeter’s Penryn Campus in Cornwall, who leads the SEACHANGE team.

“This will provide a basis for assessing whether regions that we regard now as pristine, or not impacted significantly, are actually degraded remnants of a formerly much more diverse ecosystem.”

The team previously discovered that some clams – including the longest-lived animal known to science, the Icelandic clam (sometimes called the ocean quahog) – can provide clues about the history of the oceans.

These shells grow like tree-rings, with a layer each year, so the scientists can use long-dead clams to gather information going back hundreds or even thousands of years.

Combined with analysis of seabed sediment DNA and geochemistry, the team will assess pre-human biodiversity and the way the marine ecosystem used to function just before human impact.

The team on board the RRS Discovery includes students and early career researchers.

“Not many people get to do this work or go to these places, so I feel very fortunate to be involved in this project,” said Danielle Crowley, MSc Marine Vertebrate Ecology and Conservation student at Exeter, and marine mammal observer for the cruise.

“We’re here to better understand the changes humans have caused, and to work out how to repair the damage, but being here in itself is a reminder of all we have to protect and restore.”

Professor Callum Roberts, also from the University of Exeter, added: “In developing detailed, dated time-series of ocean ecosystem change, we expect to be able to detect the earliest signs of human influence on the sea.

“And by understanding how the seas of today are different from the past, we will be able to better manage them for the future.”

Professor Roberts will speak in New York later this month at an event called: “What will it take to protect the oceans?”

To find out more about SEACHANGE, visit https://seachange-erc.eu/