We Still Have a Chance: City gears up for three climate-inspired exhibitions

We Still Have a Chance: City gears up for three climate-inspired exhibitions

Three exhibitions inspired by a University-led international climate project are preparing to open at venues across the city from this month.

We Still Have a Chance: 12 Stories for the 12 Days of COP27 reached audiences around the world last year through its combination of storytelling, performance, artwork and digital landscapes.

As part of its legacy, the project – led by the University with a host of partners including the Met Office, the British Council and the American University in Cairo – has reached out to artists and schools across Devon to produce work inspired by its message.

The first, being staged at MakeTank on Paris Street, until 3 February, is a collection of artworks produced by students at various schools, each working with a different Daisi artist. They include St James’ School and InFocus College for Visual Impairment, who worked with artist James Lake; Woodwater Academy and St Peter’s Aided School, both with Simon Ripley; and Trinity Church of England VA Primary School and St Leonards Church of England Primary School, who worked with Jess Carvill.

A second exhibition of art – in the form of a series of vibrant prints as visual translations of the stories, produced at Double Elephant – will also open 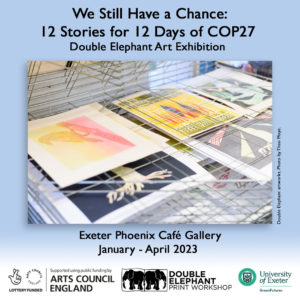 this month, running until April. This will be held in the café gallery at Exeter Phoenix with a special launch event on 23 January (6.30-7.30pm) at which some of the project team will also introduce the new printed anthology of stories.

The final event will be a photographic showcase at the Devon & Exeter Institution, on Cathedral Close, which will exhibit artwork from school students, produced with the help of Daisi artists, from Double Elephant, and from local graffiti artist Steve McCracken. The exhibition will run from 1 February to 2 April.

Dr Eliana Maestri, Senior Lecturer in Translation Studies in the Department of Languages, Cultures and Visual Studies, leads all three projects. She said:

“The collaborative nature that underpins We Still Have a Chance has enabled us to engage with numerous community partners across the city. And the powerful climate stories at its heart have proved to be perfect for translation and interpretation into new artforms. Now, through these exhibitions, we hope that we can reach new audiences and share that message of hope with them that there can be a better future for this planet.”

All three events are free to visit and have been supported using public funding by the National Lottery through Arts Council England.