The story of a turtle caught twice in fishing nets reveals a dual threat facing many ocean animals.

The female loggerhead turtle, called “Thunderbird”, was entangled in ghost (abandoned) fishing gear in the Mediterranean last year, and was subsequently fitted with a satellite tag and freed.

Researchers tracked the turtle as it swam through the Strait of Gibraltar and headed south along the coast of Africa.

But then signals became erratic, before a final position from the tag showed the turtle on land – near a major fishing port in Dakar, Senegal, suggesting it was unintentionally caught by a fishing vessel, probably a trawler.

“The turtle was found entangled in ghost fishing gear by Save the Med Foundation in July 2020, and taken to the Palma Aquarium rescue centre in Mallorca,” said Dr David March, of the universities of Exeter and Barcelona.

“We attached a satellite tag before she was released on 11 August, which allowed us to track her epic journey of 6,000 km through the Western Mediterranean and the waters off West Africa.

“Thunderbird raised an early warning when she entered into the Alboran Sea, a challenging area because of its strong currents and high density of marine traffic, which could result in a high risk of boat collision.”

At that time, the local network of the Mediterranean Ghost FADs was asked to keep an eye out for potential stranding or bycatch (accidental catch by humans fishing).

Fortunately, Thunderbird managed to swim up-current out of the Mediterranean in November through Gibraltar Strait.

Most adult turtles that move out from the Mediterranean swim towards America, as they were born in Florida or the Caribbean.

But surprisingly, Thunderbird swam along the West African coast.

“This can be explained because a small proportion of the turtles from the Western Mediterranean were born in Cape Verde, where they migrate to once they become adults,” said Professor Lluís Cardona, of the University of Barcelona and Institut de Recerca de Biosdiversitat (IRBio).

The satellite tag provided depth data, so the researchers could see the turtle was spending most of the time at the surface in the Mediterranean, then diving near the sea-bottom along the West African coast.

“In February this year, the turtle was off Senegal when we stopped receiving regular updates from the tag,” Dr March said.

“Then the final signal on 17 March was on land, near the main harbour in Dakar.

“It is always a challenging task to know what makes tag stop transmitting data, so we checked tag data to find out more about potential causes.

“After checking that battery and tag sensors worked correctly, we used the Global Fishing Watch portal to overlap the track of the turtle with fishing vessels.

“We found out that the last dive recorded by the satellite tag was near a fishing ground used by trawlers.

“All this suggests the turtle was bycaught by a fishing vessel and taken back to the port.

“We don´t know if Thunderbird was released alive after capture, or died as consequence of the bycatch event.”

Researchers are using satellite data on boat movements and working with partners in Senegal to try and find the boat that caught the turtle, in the hope of finding out more information about the fate of Thunderbird.

Dr March is part of a project created to reduce bycatch off West Africa, funded by the MAVA Foundation and run by the University of Barcelona and Birdlife International, and a coalition of partners in West Africa and at international level.

“There is a lot of unregulated or illegal fishing off West Africa, and we are working with local partners and fishing companies to adapt fishing gear and methods to minimise bycatch of sea turtles,” said Ahmed Diame, of Birdlife International.

“We are also identifying the main bycatch hotspots – such as the place this turtle was caught.”

Speaking about the area where the turtle was first found entangled, Ricardo Sagarminaga, of Alnitak, said: “After a reduction of bycatch in longline fishing over the years, entanglement in debris and ghost gear has become the major threat for sea turtles in the Balearic Islands.”

The epic journey of this turtle illustrates two of the major threats that many marine species face – entanglement in ghost fishing gear, and bycatch in industrial fisheries. We must urgently address both issues to limit their impact on a wide range of marine species and ecosystems.

Dr David March - the universities of Exeter and Barcelona.

Thunderbird was tagged within the framework of “Oceanographic turtles”, a joint programme by the Balearic Islands Coastal Observing and Forecasting System (SOCIB), Alnitak, Palma Aquarium Foundation and the University of Exeter, with the support of NOAA NMFS.

The trajectories of these turtles can be followed from this website: http://seaturtle.socib.es/es/turtle-viewer/ 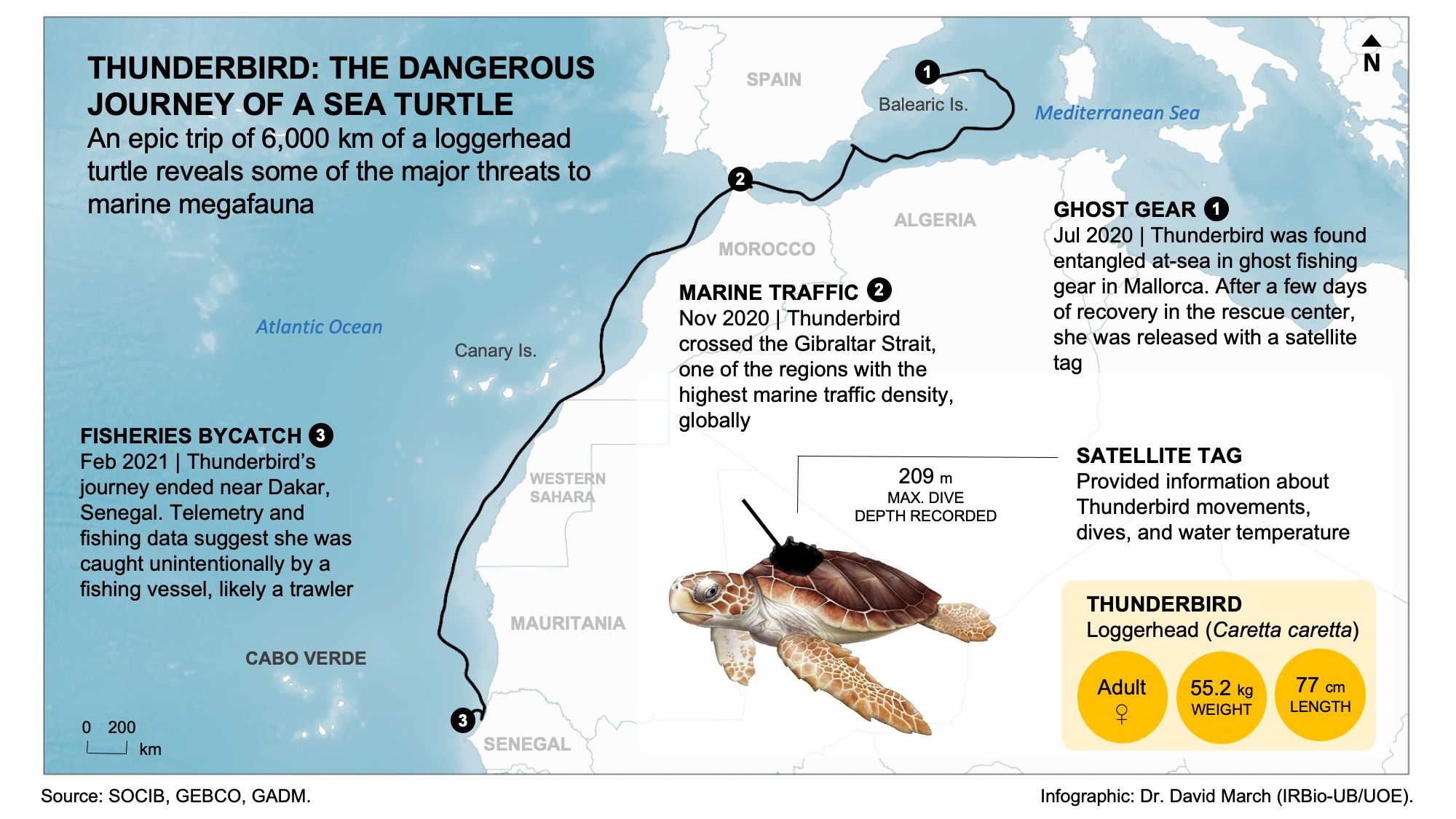 Plastic pollution has been found in seawater, on beaches and inside marine animals at the Galapagos Islands.

Microplastics form from the breakdown of larger plastic pieces, leaking into the environment as part of production, and are added as microbeads to products such...